November 20, 2019
We share plenty of similarities with our neighbours in the north, from our passion for food to our love of game development. So, in order to foster and strengthen relations with our Malaysian counterparts. Singapore Games Association (SGGA) organised and led a delegation of 25 on a 6D5N Travel & Learn Program to learn more about the Malaysian game development scene – the mission was also in collaboration with Ngee Ann Polytechnic Continuing Education & Training (CET)

The event also coincided with KL’s signature B2B conference Level Up KL 2019 led by Malaysia’s federal agency - the Malaysia Digital Economy Corporation (MDEC). The trip was aimed at educating the Singaporean delegation on the Malaysian games and immersive media
ecosystem, and also to facilitate networking with fellow industry professionals in Malaysia.The pre-trip briefing was helmed by Alwyn Lee of Daylight Studios sharing with the delegations the ins-and-outs of exhibiting at game conferences overseas as well as briefing them on the logistics of the upcoming trip.

The first day of the trip was dedicated to understanding the Malaysian development eco-system and networking with our Malaysian counterparts. The delegation toured Komune (a co-working space and home of Level Up Inc) and got to know many of its tenants who were also in the business of interactive entertainment.

Next the delegation visited Malaysian HQ of Razer, where they learnt more about their efforts to bridge the gap between high-performance gaming peripherals and the world of Fintech. Magnus Games was next on the itinerary. Magnus games was the studio behind one of the most funded Kickstarter video game in Southeast Asia Re:Legend with over S$630K raised. The day ended with a networking dinner with the Malaysian chapter of International Game Developers Association (IGDA). The dinner was hosted by Shawn Beck, IGDA Malaysia Chapter Coordinator and proudly sponsored by Koelnmesse the company behind Gamescom Asia.

The next two days were dedicated to Level Up KL 2019 where the delegation mingled and networked with developers and publishers from all around the region. But Level Up was much more than just exchanging business cards and pleasantries, there were also workshops and talks aimed at helping attendees hone their craft. The delegation also had an informal reception with High Commission, Enterprise Singapore (KL Office) and other Singaporean companies in the region. After a warm reception, the delegation stepped into The Rift - Southeast Asia's largest VR/AR Theme Park. 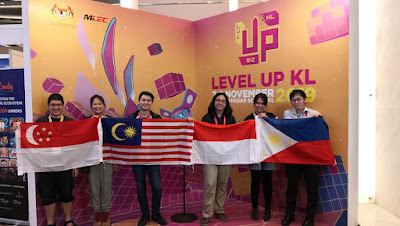 The final business day of Level Up 2019 ended with lessons learnt and opportunities discovered, with the evening dedicated to the Southeast Asia Game Awards. The next few days were dedicated to the public, the event halls lit up and became the game convention that we’re all familiar with – the glitz, the decibels and most importantly, the games. Some members from the delegation even showed off their works to gamers who came from all across the region. 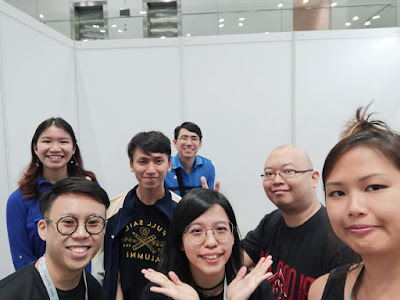 After 6 days of learning and networking, our Singaporean delegation concluded their mission with brand new friends, fresh perspectives and a renewed passion for the industry.
We would like to thank Malaysia Digital Economy Corporation (MDEC), Singapore High Commission in KL, Level Up Inc, Razer Malaysia, Magnus Games and IGDA Malaysia for hosting us.

Popular posts from this blog

September 08, 2021
The Singapore Games Association is proud to announce Singapore Games Week (SGW), happening from 11th to 17th October! Held in conjunction with gamescom asia, SGW is a showcase & celebration of the Singapore Games Industry and its communities, with the goal of showcasing Singapore’s vibrant games industry to the general public, as well as the international gaming community. SGW 2021 will feature a number of activities including a Singapore Pavilion in gamescom asia, industry networking opportunities, the SGW Virtual Village exhibition, and more! Check out the activies here SGGA Members will also enjoy heavily subsidized rates for SGW x gamescom asia 2021 package. For more information, please read the full SGW 2021 brief here: bit.ly/SGW2021Brief The full press release can be viewed here , and follow us on our social platforms below: Facebook , Twitter , LinkedIn , Discord We look forward to seeing you there! * Join us as a member today: bit.ly/SGGAMember
Post a Comment
Read more

May 04, 2020
COVID-19 has brought about tectonic shifts in the way the world interacts with one other, implementing work from home arrangements and home-based learning in efforts to control the spread of this highly contagious virus. We soon discovered that while some of us have embraced all-day PJs and more personal time, a home-based economy has also come with a number of social issues. Isolation, especially among those who live alone or are separated from loved ones, exacerbated feelings of loneliness, boredom and depression. In Singapore, we also have a large population of migrant workers whose living conditions were perfect for the virus to spread, and being far from home, can only rely on the goodwill of the government and Singaporeans to ensure that their well-being is taken care of. So, when our friends at MDEC (Malaysia Digital Economy Corporation) invited us to be a part of the international YANA (You Are Not Alone) initiative, we jumped on board. YANA’s goal was to bring people to
4 comments
Read more

July 16, 2019
On 13th July, we held our second annual Industry Day; an event which aims to bridge the gap between education and development industries of games development and become a nurturing ground for Singapore-based talents to springboard their career in the industry. The Industry Day was supported by Eliphant Pte Ltd, the organizers behind GameStart, and Impixel, an innovation space that aims to incubate and support the local games & tech industry. Close to 200 attendees (an increase of more than 60% from last year’s inaugural event)  showed up, including a Malaysian delegation of approximately 40 attendees from Camou Academy of Media Arts, Chicken Feet Studio (a studio the academy is incubating) and Glow Production. The Industry Day had many veteran game creators share their experiences,  trials and tribulations, as well as giving valuable, diverse advice to the attendees. Jonathan Blow, Game Designer and Programmer, shared his insights into the industry into independent
1 comment
Read more